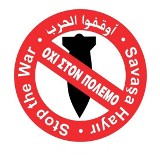 Each July, ordinary people from both communities honour and commemorate their dead. For decades the nationalists of both sides took advantage of this pain and suffering to promote hate and their divisive aims.

Since 2003 and for 6 years, Stop the War Coalition had taken the initiative and every July organises bi-communal events with G/C and T/C organisations and activists in memory of the innocent victims of both communities killed in the wars in Cyprus.
This year, in our activities, we want to honour the memory of all those who helped save lives of people from the other community «the enemy side». They saved the lives of their friends, villagers etc from the hands of «their own» nationalists and extremists. These stories are now coming to the surface and are becoming more and more known thanks to the work of people such as the journalist and activist Sevgul Uludag.
We invite everyone interested, both organisations and activists, to an open meeting so we can discuss and decide the activities and memorial events for this year. These events are the best response and reply to the nationalism and cold-war climate that is promoted by the right of both communities.
Date: WEDNESDAY 24 JUNE 2009 from 19:30 till 21:00
Where: «Epea Pteroenta» (next to Café Kala Kathoumena, nearby Phaneromeni Church), Nicokleous 21, walled Nicosia.
Phaedon Vassiliades – Stop the War Coalition –Cyprus
Note: Please let us know if you are interested in participating and/or attending the meeting: 99625620 / 99698503 / 99081875